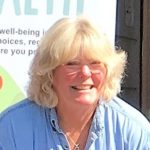 hristy was born and raised in Pacific Palisades in Southern California.   She attended California Western University, San Diego for four years.  She raised her two daughters in Torrance, California.  Being fortunate to not have to work while her children were young, she was able to be her daughter’s Girl Scout leader for 11 years and spent a lot of time playing and enjoying tennis in sunny SoCal.  As her daughters grew older, Christy worked part-time in an orthopedic doctor’s office and for her family until her husband retired in 2003.

After camping as a family for a month every summer at Camp Richardson for 31 years, it always was their dream to retire to beautiful Lake Tahoe.  Once retired, they bought their own little piece of Tahoe in 2004 and moved up fulltime in the summer of 2007.

Christy spends her time hiking, biking, snowshoeing and kayaking and boating on the lake.   She is a movie buff and tries to go to the movies weekly with her husband.   Being a big PBR (Bull riding) Rodeo fan, she and her husband travel to as many events as possible and watch it every weekend on TV.  Yee Haa!!!   Another favorite activity is traveling and sightseeing with their dog in their RV.  Spending family time on special Holidays in Southern California with her children and 5 precious grandchildren is a top priority for Christy.

Having had so much good in her life, Christy always felt the need to give back and help others.  In retirement, she finally had that time.  Even before moving to Tahoe full time, she began volunteering and serving at Bread & Broth in 2005.  Her time with Bread & Broth, and more recently B&B 4Kids, makes her happy and she feels very fortunate to be a Bread & Broth volunteer helping to ease hunger on her community.