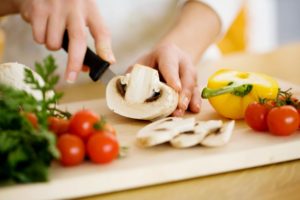 The Bread & Broth organization began in 1989 as a multi-denominational food outreach program inspired by the leadership of Father John Grace, who was the pastor of St. Theresa Catholic Church. Father Grace joined in partnership with the Lake Tahoe Community Presbyterian Church and many committed community members to realize his dream of helping the hungry in our community. On October 19, 1989, the first meals were served at St. Theresa Grace Hall at no charge to all who came through the doors.

Since the first meal was served, thousands of food insecure community members have entered Grace Hall’s door to not only have their hunger eased but to find a safe and secure gathering place where they are treated with dignity and shown the warmth of those who care.

As funding from our generous donors increased over the years,  Bread & Broth focused on improving the nutritional value of food provided at the Monday evening meals. Our hot “Monday Meal” dinners are now well-balanced, full-course meals which include meat, fresh vegetables and fresh fruit; seconds are provided and food “giveaway bags” filled with dairy products, fruit, vegetables and bread/pastries are distributed at every “Monday Meal” event.

In May 2009, the Bread & Broth organization added “Second Serving” which serves a soup and simple entree meal every Friday at the Lake Tahoe Community Presbyterian Church.

Wanting to help the help the children in our community,  Bread & Broth implemented the “Bread & Broth 4 Kids”  program in Septembers 2015. This program provides weekend meals during the school year to K-8 LTUSD  students faced by the threat of hunger. As a follow up to the weekend food program, “Bread & Broth 4 Kids” began its ‘School Healthy Snack’ initiative in the Spring of 2016. Realizing that food insecure children get hungry during the school day which can deter learning, “Bread & Broth 4 Kids” gives over 500 healthy nutrition bars weekly to LTUSD school staff members to give to needy students. In an effort to improve the nutritional value of the food in the kid’s bags, the “Push for Protein” initiative was implemented in 2019. Funds were provided to purchase kid-friendly food with increased protein value and reduced salt/sugar content, such as nuts, dried fruit, protein bars, and canned meat.

Thanks to a very generous donation from Vail Resorts CEO, Rob Katz, and his wife, Elana Amsterdam, Bread & Broth’s  most recent expansion was the “Summer Bread & Broth 4 Kids” program which was launched in June 2017 to focus on helping kids have access to food during the summer months.

As a demonstration of Bread & Broth’s commitment to easing hunger in the Lake Tahoe South Shore community, Bread & Broth continued to provide food for those in need during the COVID-19 pandemic. Beginning in March 2020, in lieu of our hot meal service, “food giveaways” were held every Monday and Friday in which meat, fresh fruit and vegetables, dairy products, breads/pastries, and basic staples (rice, spaghetti, nutrition bars, canned fruit and vegetables, etc.) were given to those who came to Grace Hall.  Individuals and families received four to five bags of nutritious groceries (eight to ten bags for families of five or more). With school closures, weekend food bags for children were provided at the school’s emergency lunch program bus stop locations every Friday until classes resumed at the schools. Even with the evacuation of the South Tahoe community due to the Caldor Fire, Bread & Broth resumed our emergency food programs the first Monday upon the rescinding of the evacuation order. Two years later in March 2022, as pandemic restrictions allowed, Bread & Broth returned to our traditional hot meal services.