Susan has  lived in South Lake Tahoe since 1974. She and her husband have 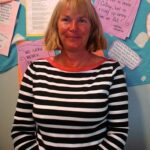 two children who were both raised in South Lake Tahoe, went away for college and then moved back to make Tahoe their home also. The Bakers also have five grandchildren.

Susan started her career in the food industry and ended her career as the Principal of Mt. Tallac High School. She has a passion for helping those in our community who need support. During her tenure with Lake Tahoe Unified School District, she started the Young Parent Program to help support and keep in school students who were also either pregnant or parenting. Susan also began helping with Bread and Broth when it began in 1989.  She has been on many Boards including Tahoe Turning Point, a non profit group home in South Lake Tahoe  to meet the needs of students removed from their home for a myriad of reasons.

Susan has been a member of Lake Tahoe Community Presbyterian Church since 1975.

She has held many leadership roles; she served on the Session for a total of eighteen years, she has been a member of the Board of Deacons, has served as a member on two Pastor seeking committees and was a Sunday School teacher for many years. Currently, Susan is a liaison to the Session for our Second Serving Bread and Broth program and honored to now be part of the Bread and Broth Advisory Board.